It's been quite a while since I last wrote in here. I blame school. I've been out of school for a few weeks now and am out until near the end of August, so maybe I'll update this a couple times before I get sucked into that black hole again.

Much has happened since last I wrote. I got a promotion to a new job that I like much more than my old job. I am a happy lady with a fuller bank account. I get satisfaction from my job. It's nice.

We also bought a house. We are moving into it next weekend. This weekend, Joe and I are painting pretty much the entire upstairs. That should be fun. Not really, but at least it will be done. My mom is watching the girls while we do it, so at least we won't have the kids getting into the paint.

I also am pregnant. "Again?" you are thinking. Yes, again. This is theoretically our last kid, but knowing how we are, don't rely to heavily on that statement. It's our last planned kid. Not that this kid was planned. But, whatever. We are excited to bring another baby into the mix. I found out I was pregnant around the time we started our house hunting, so we did manage to get a four bedroom.

So, there's a lot going on and many good things. My life is almost too good right now. It's kind of concerning. Like, what horrible thing is going to happen to counteract all this awesomeness? We shall see. I was convinced our new house would be destroyed by a flash flood or tornado before we even moved in, but so far, so good. As for now, we are happy and things are going well.

Third pregnancy is so weird. The first one is kind of remarkable. It's so cool the way your body just changes and does stuff and just somehow knows how to do it. Very impressive, body! The second time, it's kind of a smug rehashing of the first pregnancy. "I know this deal. I'm not a lame first time mom anymore. I'm too cool!" That is the second pregnancy attitude I possessed. Third pregnancy is more like, "I"m pregnant? I forgot again." I don't have time to think about this pregnancy at all. People ask how far I am, and I'm like, "Uh, somewhere between 15 and 17 weeks. I forget which."

We are not finding out if this one is a boy or a girl (until birth, I mean. I'm assuming it will be fairly obvious after the child is born.) I think it will be fun to have a surprise this time. I need something to shake this pregnancy up and shoot some excitement into it. That's another thing about third pregnancy. Everyone seems less excited and is more like, "Oh, you're doing that again." Like it's your unseemly hobby or something. "Ugh, Megan is having ANOTHER baby we have to pretend to care about. I'm so over it."

Anyway, enough about baby number three (who we are very excited about, despite my joking.) I missed blogging about pretty much everything that happened so far this year, so here are some pictures of things we did over the last few months. First, Ramona ran the kids' marathon again this year. She was more excited about it this year, and "ran" it fairly enthusiastically. She lost her shoe twice, so I guess next year I'll have to get her lace up shoes or something. 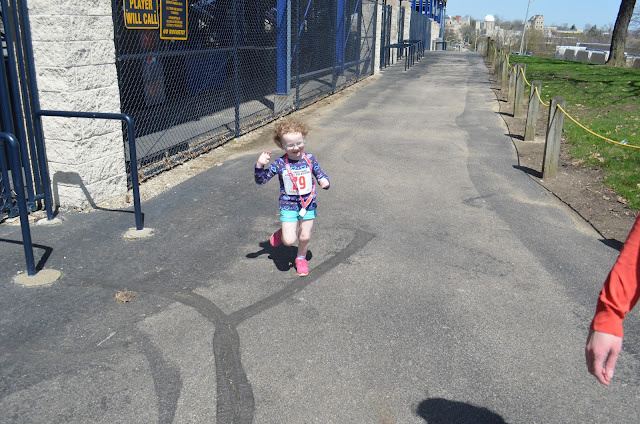 And, referring to the title of this post, I also had my fourth annual Mother's Day pictures, and first (and I guess last) pictures as a mother of two. Joe got some good ones, and I was not disappointed. 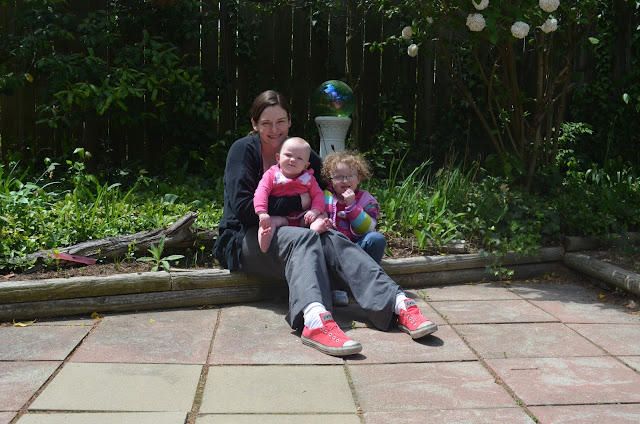 That was probably the best posed one, in the sense that everyone is looking at the camera. Not great or anything, but me and my kids, on "my" holiday, as requested. 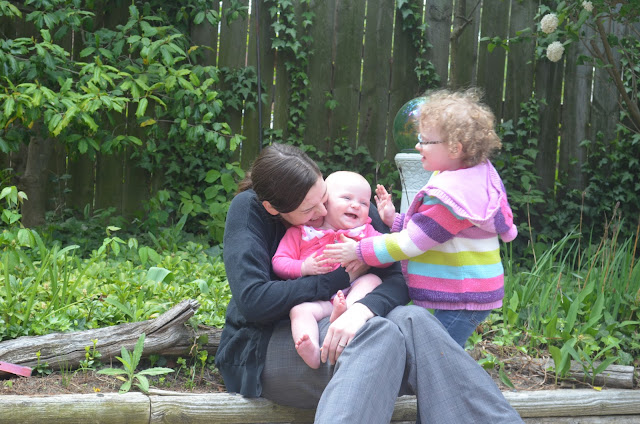 But this was my favorite. I was tickling Ruby and making her laugh and Ramona ran over to get in on the fun. 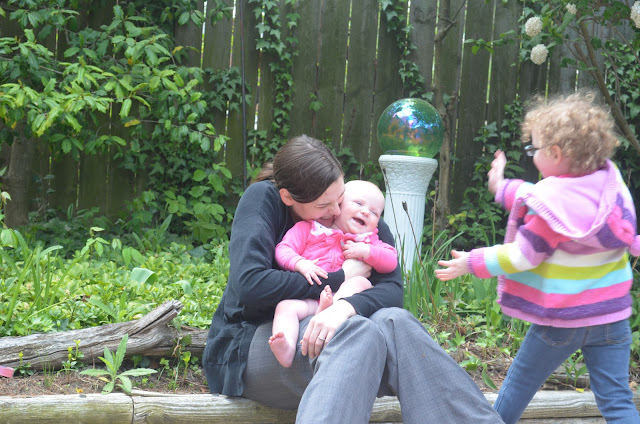 Giggling babies are the best.

And speaking of the soon-to-be middle child, she is funny and opinionated. She's a handful but also very lovable and sweet. She's an awesome cuddler and she can meltdown like nothing over anything. Every day is an adventure with that kid. She still isn't walking yet, but she's getting close. She has the occasional step every once in a while, but no concentrated intentional walking. It's coming very soon, though. And then no one will be safe. Time to baby proof this new house.
Posted by Megan at 9:47 PM 0 thoughtful comments