We finally got some snow in northwest Ohio (not until mid-January? Highly unusual!) But I enjoyed the mild winter so far, although I was pretty excited about getting snow. Joe and I got Ramona a sled for Christmas, so we were pretty excited to take her out on it. Last year, we pulled her around in a sled one time, but she had yet to do any real downhill sledding. So we got her all bundled up in her snowpants and the whole bit and took her to the hill on the golf course at Ottawa Park. There were quite a few people there, but not so many that it was annoying or overly crowded and kids were running into each other or anything.

At first Ramona had a hard time holding on and kept slipping off. I was cracking up as I took this picture. This is Joe taking her up the hill so they could sled down for the first time. As soon as the hill got to an certain angle she just sort of fell over and laid on the sled. 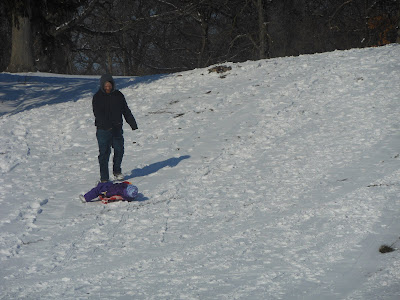 She eventually got the idea and could sit up while getting pulled up the hill (which was much easier than carrying her up it, and she was having a hard time walking with her snowpants and boots and everything.) Joe talked me into going down with her once, so both Ramona and Fetey got to go sledding today. 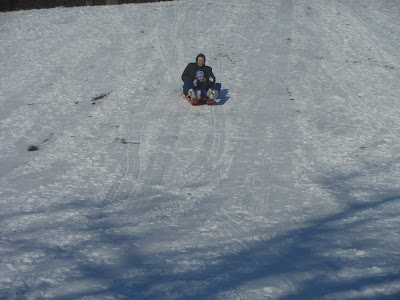 But I was mostly on photographer duty. I don't think sledding down a not-particularly-steep hill is really too dangerous to while pregnant, but I was worried if we had a wipe out I wouldn't be able to protect both Ramona and my belly at the same time. Plus I almost hit some kid the one time I went down, so I was kind of worried about my inability to steer the sled while holding onto Ramona, which was a problem for both me and Joe. 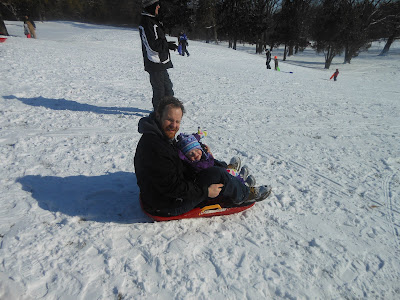 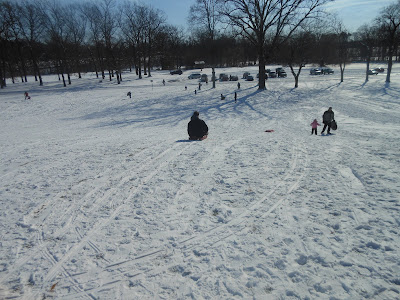 Those pictures kind of give you an idea of the size of the hill and amount of people there. Like I said, there weren't too many people and it was definitely the "bunny hill" of the area, which was nice because it was mostly families with younger kids. Ramona was the smallest one there, but not by much. The oldest kids were probably eight to ten, and all the kids were young enough that they were there with their parents, which meant none of them were being jerks. And the parents were all helping each other out and asking each others' kids if they were okay if they fell off their sleds and their parents were still at the top of the hill or attending to their siblings or whatever. So, it was really nice. I had fun, and Joe has been talking about sledding since Labor Day, so he definitely had fun. I think Ramona might have had fun, too. 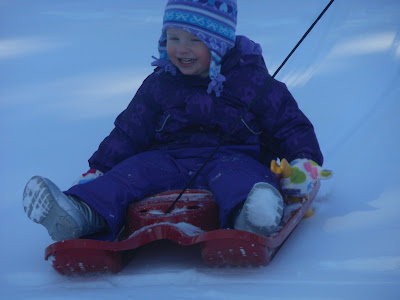 So I'm going to play catch up out of chronological order and post about New Year's Day before Christmas. Sorry, but I started looking at these pictures first, so they win.

I started out reading to Ramona and I really like this picture, so I'm making you look at it. 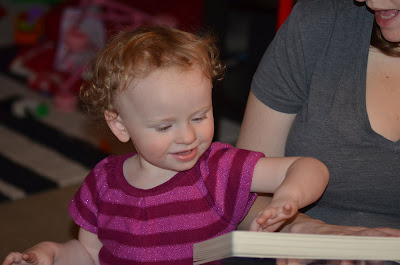 Then we went to go see the Lights Before Christmas at the zoo. (Misleading name, as it was after Christmas.) Ramona was very excited about wearing mittens. "My gwuvs!" 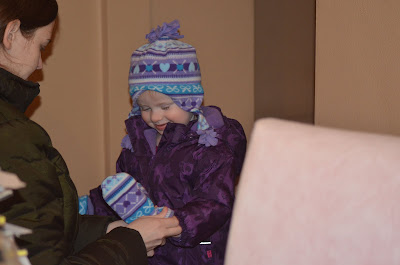 We had an awesome time at the zoo. Last year, we had such a crappy time at the zoo lights, so pretty much anything would have been an improvement. But this year was AMAZING and totally beyond the magic I had imagined. Ramona was so excited about the lights and kept exclaiming, "Look! It's beautiful lights!" and things like, "Daddy! See octopus lights!?" We also rode the carousel and she thought that was great 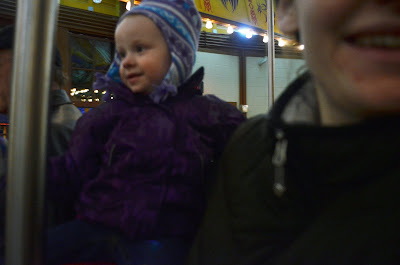 And I loved the new colored lights they had this year. They looked like they were different sizes, but I think it was an optical illusion caused by the lights being round and black on one side. Here's a picture (on the right), but it doesn't really represent the awesomeness. 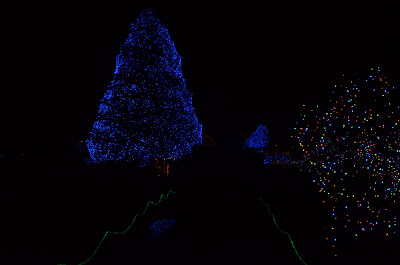 Then we went to the museum and got hot chocolate and gingerbread men, as tradition dictates we do. 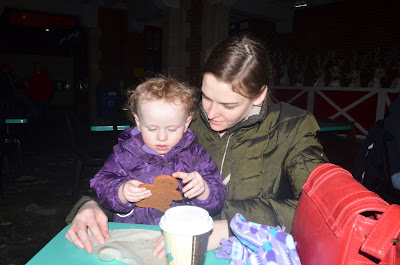 Ramona was super into the bugs, which are kind of my least favorite part, but Muno from Yo Gabba Gabba has brainwashed her with the "I Like Bugs" song (which she sang as soon as we walked in and she saw a giant millipede.) 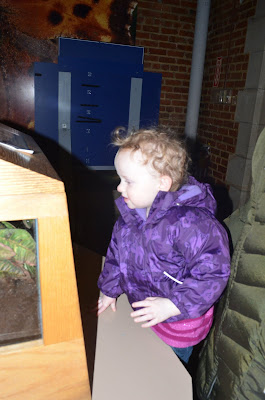 We also looked at the fish and did a lot of walking and looking at lights. Good times were had by all. After that, we headed over to Joe's parents house to drop off Ramona and visit for a little bit. Joe and I went back to the house where I insisted on dressing up a little. It's New Year's! I had to wear something sparkly, dammit! And I had some sparkly tights, so, there ya go. Then I made Joe take pictures because I don't dress up very often, and it's nice to have a picture of me not looking like crap every once in awhile. 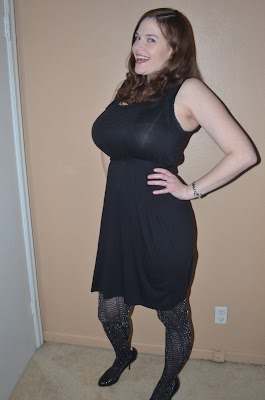 Just because I don't look like crap, doesn't mean I can't look ridiculous! After that, we went to Nick & Jimmy's in Temperance and got a snack. Then, we picked up Tauno and headed to the Knotty Pine for midnight. They had free hats, horn blower things (what are those called?), and champagne at midnight. I drank water all night as both DD and a pregnant lady, but I did have a splash of champagne at midnight. After the big moment, we headed back to Joe's parents' house to pick up the Fish. I was expecting her to be passed out, but she was partying in her jammies still. Apparently, she stayed up and did the countdown at midnight and yelled "Happy New Year!" That kid, I tell ya.

Anyway, then we headed back to our house. I had been texting with Nina throughout the night and she said to stop by if we felt like it. Honestly, I expected Ramona to fall asleep before we got back to the house, but she was not only still awake, but kept yelling at Tauno to wake up. So, I figured we could swing by Nina's on the way home since she's only a few blocks away.

I was kind of hoping she would be happy to see me, since I was bringing an unexpected toddler and "getting pretty sloppy" Tauno. Luckily, it seems that I didn't ruin the night. Yay! We hung out for maybe an hour and then headed home. Ramona finally crashed at 2am with me. Tauno and Joe stayed up drinking and watching TV, and I have no idea when they finally passed out.

I have to say, it was a pretty kickass start to 2012. And as far as 2012 goes, we already have two awesome weddings to look forward to, not to mention the fact that we will have another baby. I have a great feeling about this year. I hope I'm right!
Posted by Megan at 8:37 PM 1 thoughtful comments

There is so much to write about with all the holidays having passed, but I've been being lazy. Tonight Ramona is actually taking a nap, so I have time to kill, so I figured I'd throw a quick update here. Today was another pregnancy appointment. The midwife says everything is looking good and I set up my anatomy scan ultrasound for February 6. With any luck, we'll find out if Fetey is male or female then. (I started calling the fetus Fetey. What do you think?) Anyway, I started feeling its movements in the last couple weeks, so that is always fun. I'm 17 weeks and still not really showing, although I certainly feel bigger and my pants are getting tighter.

Ramona doesn't really understand that she will have a little sibling soon, but it's a pretty theoretical for someone her age, so I'm not too surprised. Honestly, it's hard for me to believe that we'll have a new baby here soon. I've been so hung up on thinking about all the crappy parts of having a baby that I haven't really let myself focus on the fun parts at all. But today at the doctor's office, I was in the examination room across the hall from the UTMC Babies board, (you know, that bulletin board full of pictures of babies delivered by the practice that every OB office has) and I suddenly remembered how cute babies are and how fun and exciting they can be. So I have been kind of floating around in baby excitement most of today, which has been nice.

I want to post about Christmas and New Year's, but I want to post pictures, which means I have to get the cameras up and running. So, maybe tonight, maybe not. The quick version is they were fun and we were happy.
Posted by Megan at 5:40 PM 0 thoughtful comments