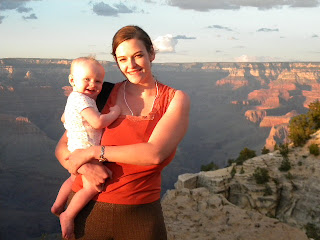 Not the best pic of either of us, but a memory nonetheless
So we spent the first half of this week in Arizona, back to the land from whence we came. We left on Saturday and stopped in Vegas for Endless Shrimp at Red Lobster (which is Joe's raison d'etre.) We got up to the Canyon around 8:00 and went up to Maswik where we saw some old friends. Edwina said she is going to teach Ramona to speak Hopi. We ate pizza and hung out, and then I took Ramona back to the hotel for bed time and Joe went out to drink with his buddies. The next day I got up early (because Ramona doesn't really give me a choice) and called up my friend Ann. We went to breakfast and walked around the Rim Trail. It was really good to see her and we had some serious talks that I really needed. Mony was with us part of the time in her stroller and then when she was getting restless we took her back to play in the hotel room with Joe while we took another walk. After that Ann left and we got ready to go to Williams where my conference was. Joe and Ramona walked me to my room, so a few of my old accounting buddies got to see her. Then Joe and Ramona went back up to Grand Canyon and left me at the conference.

I was really not looking forward to this conference at all. I was sure we would learn stuff that had nothing to do with me, and that we'd have to play stupid team building games and do all that stuff that is so awkward that no one enjoys but they always make you do for some reason. Luckily, I was completely wrong. First of all, there was free beer. Honestly, they could have just sent out a memo in March that said, "Free Beer at the Controllers' Conference!" and I wouldn't have spent the year dreading it. I drank enough to get socially lubricated and met a bunch of people from all of our company's other properties. Everyone was nice (some were a little strange, but in a fun way) and I had a nice time. The sessions were informative and I learned a lot. And there was a lot of free food, little gifts, and just all around pleasantness. I missed Joe and Ramona but we talked on the phone every night. Also, did I mention that I got to sleep through the night, all alone with no one biting my nipple or kicking me in the stomach? That was definitely worth the whole trip.

But seriously, I did miss them a lot. We took the train up to the Canyon for the conference on Tuesday (in the dome car which was SOOO cool and comfy!) and one of the entertainers came up to sing for us and he did "What a Wonderful World". I admit I got a little teary eyed when he sang the part about seeing babies smile and watching them grow. So luckily, I got to see Joe and Ramona during my breaks when we were up there. There was a picnic lunch at Shoshone Point, which I had never been to, and it was really gorgeous. There were some more sessions, and we got a nice dinner at the El Tovar along with a couple more beers, so it was a nice time. We bussed back down to Williams and I went right to sleep. Wednesday was the big accounting game. Our team lost, but it was actually fun and a good time was had by all. After that we did a tour of the train shop and got to see where the work on the trains and we got to go up in the engine part of the car and look around. I really want to take Ramona on the train when they do Polar Express at Christmas time in a couple of years. They use the old timey cars and everyone wears their pajamas and they have hot chocolate and cookies and read the story and then you get to "the North Pole" (an area with Christmas lights where Santa gets on) and then Santa meets all the kids and gives them sleigh bells to take home. It's a really cute idea and I think it would be really fun for a kid at the right age.

After the train shop tour the conference was over so Joe and Ramona picked me up. I got a Christmas ornament with the Railway on it and got Ramona a toy train. Then we went to Flagstaff to get lunch. They opened a new brewery since the last time we were there, so we checked it out. It was called the Lumberyard. The food was pretty good and we did a sampler of the beers and there were a couple of really nice ones. It's owned by the same people who run Beaver Street Brewery, but the feel and menu are really different. After lunch we walked around the shops a little bit and then started the long journey home. We got back around ten and got some sleep. Today was work and playing with my Baby Fish. I missed her so much, but I'm so glad she got to see our old friends and have some time to bond with Joe. And of course, nothing beats that, "OMG! It's MOMMY!" smile she had when they picked me up on Wednesday.

In Mony news, her ninth tooth popped out, so she officially has a molar, and her next three are poised to break through at any time. She is now eleven months old, meaning I have less than a month before my little baby is a year old. It has been the fastest year of my life by far. She's grown and changed so much. Then again, so have I.
Posted by Megan at 11:36 PM