I've been feeling really good this weekend. Friday Joe and I had a serious conversation about our plans for the future and I feel much better about where we're going as far as whether we're moving and when. We have a couple options we're open to and we just have to see what happens over the next couple of weeks to figure out our final decision. I'm feeling much more at peace with things since we talked.

Yesterday we went to Pahrump and ate at the Thai place. I'm kind of falling in love with it. We went there a couple weeks ago for the first time on the recommendation of one of the guys Joe works with (whose girlfriend is Thai.) It was awesome so we went back again this week. Ramona was kind of obnoxious there, but not melt down crazy. She was just upset about having to be in a high chair, which she's been pulling a lot at home lately, too. Although at home I thought it was just because we only have a Bumbo and not a real high chair. I guess that's not the case.

After that we went to the grocery store to get stuff to make burgers for Labor Day. Then we headed to DQ. They put in this Dairy Queen not too long ago and it is Pahrump's saving grace in my eyes. I love ice cream to a ridiculous degree. When I was pregnant with Ramona I ate an entire pint of Ben and Jerry's pretty much every day of the last two months I was pregnant. Now that I'm not pregnant I can't get away with that much ice cream, but I still eat too much, so I was psyched when they put it in. Sorry, I got side tracked about my ice cream obsession- anyway, the reason you should care about our trip to DQ is that Ramona waved at a stranger for the first time! Joe went to the bathroom and Ramona and I stood around waiting for him and Ramona was making goofy Ramona sounds. Some guy said, "You sure have a happy baby!" I was like, "Well, we just had ice cream, of course she's happy!" Then I did the usual Mom, "Say hi, Mony" that I always say when strangers comment on her, even though she's obviously not going to, but this time she WAVED. She's never done it before. She just started waving at Joe and me this week, so I hadn't actually expected her to do it. Of course, this is Pahrump, so we can put in Ramona's baby book that she waved for the first time to a 60 something year old man in a giant tie dye t-shirt who had a ZZ top beard and a face tattoo. Awesome!

We went home and played in the living room. Ramona learned something that was really cute but will probably be really annoying in the coming future which I video taped and will post tomorrow. (Oooh what a hook! Now you'll have to come back tomorrow to find out what it is!) Today, I made whoopie pies for tomorrow. I'd never made one or even had one before, but I was looking for ideas for something to bake for Labor Day on Bakerella and saw a post where she made them. They looked like Oreo cakesters to me, which I've also never had, but have been meaning to try, so I figure what the heck, I'll make those.

Ramona was really good today so I had a pretty easy time making them. She was also very helpful. I taught her the most important part of baking:

Licking the beaters! Later I was thinking I probably shouldn't have done that since there was a raw egg in the batter, especially with that salmonella scare a few weeks ago, but she's fine, so whatever. Lucky us. Anyway, after all that sugar, can you believe she didn't take a nap today? Shocking. 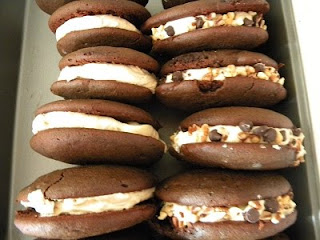 They turned out pretty cute. I did half with chopped nuts and mini chocolate chips and half without. I haven't tried any yet since I'm saving them for tomorrow, but they smell awesome. Joe has to work tomorrow so I'll send the extra ones with him for all the poor stiffs who have to work Labor Day.
Posted by Megan at 10:21 PM