I got a lot of homework done this week, and am feeling much less frazzled now that my Global Business class is over. I had two exams this week so I was on edge trying to get things done, but now that it's all over I feel better. I still have my accounting class until the end of July, but it's online so I at least feel less pressure about time.

Friday night Joe's parents church had a group outing to the Toledo Mud Hens game, so we took Ramona to her first baseball game. She had a blast! She was so excited to be around so many other kids and ran around everywhere. I think baseball is incredibly boring, but I usually have fun at actual games, and this was no exception. We also got Ramona a Mud Hens shirt and found out Wow Wow Wubzy is going to be at the game the day before Joe's birthday, so we might go to that game since Ramona loves Wow Wow Wubzy and apparently loves going to minor league baseball games. I will go anywhere there is beer and funnel cakes, so it's fine with me. We also stayed at the end for the fireworks because I wanted to see how Ramona liked them so we could come up with a plan for the fourth. She was kind of nervous about the noise. She was with Uncle Ben (Joe's brother, not the rice enthusiast) when they started and was upset, but once she got in my arms she was less scared and more excited. So, I think we'll take her to see fireworks. I just have to figure out where. 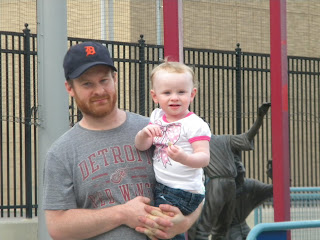 Sometimes she seriously looks just like a little Joe clone 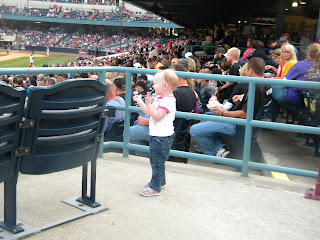 She loved that everyone kept clapping and clapped right along 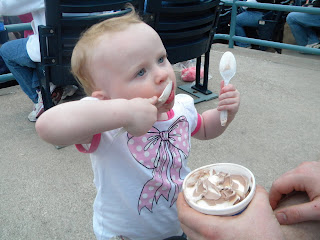 Joe said, "Let's get her some ice cream!" She decided she needed two spoons. And ate the whole thing of ice cream by herself! 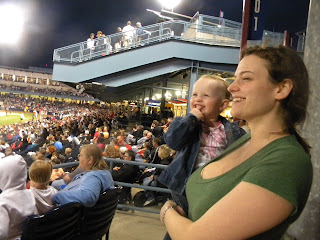 We had a lot of fun cheering together

Saturday we walked up to UT so I could pick up a project I need for my accounting class and we got lunch. I showed Joe around campus and took him through a few places he'd never been before. Ramona enjoyed running around and playing on campus. After that, we got home and Joe used the new grill he got for Father's Day for the first time and made a bunch of ribs and had some of his friends over. I was mostly on Mony duty and had a bunch of homework, so I didn't get to have as much fun, but I did get to talk for a little bit. Ramona had fun playing outside all day. She wore her new swimsuit (which is almost too small already- stop growing, little fish!) and played in the sprinkler. I was actually a champion mom for once and remembered to not only put on sunscreen to begin with, but also to reapply a few times. So, no sunburn for Mony, which is always good.

Today we just hung around the house. I had an online exam and we slept and played and watched TV. I worked on weddingbee crap for a little bit, but I need re-size my engagement pics for that, and I'm being super lazy about it. I did want to get some around the house type stuff done that I didn't even start, but it's ok. I will make valances for the living room some day.
Posted by Megan at 8:48 PM