I've decided to title all gross posts involving vomit, pee, or poop "Seriously?" so that if you're not inclined to read them, you can avoid them. Thank me later.

So tonight I was giving Ramona her bath. She has been scaring me constantly lately with her ability to pull up on things because she almost always falls over and I'm terrified she's going to hurt herself. The bath is no exception. She still takes her bath in a little tub inside the big tub, but she reaches out and grabs the edge of the big tub to pull herself up. So she did this tonight and I reached out and helped her stand so she wouldn't scare me. She looked at me all excited and smiling. (She's very proud of this new standing ability.) I started doing a little dance with her. She was smiling and laughing and then I noticed she had a tail growing between her legs. Yup, she was dancing and pooping in the bath tub. I pulled her out of the tub and sat her on the toilet.

Luckily she has been eating Cheerios so it was a solid poo and she was standing up, so it wasn't a huge mess. Since it was so easy to clean (and bonus her using the toilet saved us a diaper!) I wasn't mad at all and actually thought it was hilarious. I wish I had a picture of her joyfully dance pooping. I will definitely keep the mental picture for the rest of my life so that when she's being a jerk in a few years and thinks she's so cool, I can just picture her joyfully dance pooping and think, "You're not that cool." 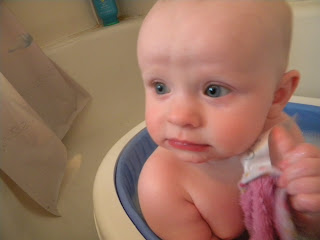