The family that vacations together something that rhymes with vacation together 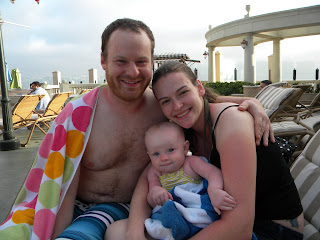 So, San Diego was awesome. Getting out of here is always great in general, but the vacation was really fun and it was nice to spend some time together as a family. We also got some pictures with all of us in them since my sister was there, so that was a bonus.

We left at 3am on Saturday morning so Ramona could sleep through the drive. I drove so Joe could sleep since he'd worked that night. Well, I drove until we were almost there and then I was tired and getting annoyed with traffic so Joe took over. We went straight to Sea World since it was too early to check into the hotel, so we were all a little gross since we were wearing clothes we'd traveled in and hadn't brushed out teeth. But we got there and had a lot of fun. The first thing we did was go to the sea lion/harbor seal exhibit and there was a cute seal that had learned to wave at people so they would feed him. It was so cute! Ramona did not seem interested in the animals at that point, but I didn't expect her to be. We went to their new show which was a dolphin/pilot whale/bird thing and it really sucked. I mean, I guess it would've seemed ok if they advertised it as a dancing with some animals, but they made it seem like an animal show with some dancing, which it definitely wasn't. Ramona was pretty fussy during that show, too, and we left early because none of us were really into it anyway. After that Ramona took a nap, which helped the rest of the day go pretty smoothly.

I also feel like I should point out how awesomely baby friendly Sea World is. They have bathrooms devoted entirely to diaper changing areas, and they have rooms for nursing all over the park. They also had signs letting you know that there was bottle warming service at all restaurants. It was nice to see them work so hard to make it easier to take babies there. There are a lot of family friendly places that aren't necessarily set up to cater to babies, especially regarding nursing areas, so I was really happy with it (even though we did bottles that day.) After Mony's nap we went to the Sea Lion show, which is always my favorite. I was just beaming like a little kid the whole time. It was awesome and Ramona was really good at that one.

Then we just wandered around and looked at stuff. There was an area where you could pet bat rays, but I couldn't get one to come to me since I wouldn't buy any food, so I was kind of bummed. But other than that it was pretty awesome. We went to see the Shamu show at the end of the day and it was fun. Ramona was ok during that one, but she wanted me to hold her standing up the whole time, so Joe and I took turns going out to the exit to stand up. After that we bought her a Shamu doll and left. Erin seemed like she enjoyed Sea World, too, and it occurred to me that she probably didn't really remember the last time we'd been since she was so little then.

We went to check into the hotel and everyone was a little sunburned despite the SPF 60 sunscreen we'd put on twice. Ramona didn't seem bothered by it (I think she hated getting sunscreen on more than she hated having a sunburn), but hers looked much worse than it actually was since she's so pale. I felt bad about it, especially since everyone who saw her had to say something about it. ("Oh, thanks, that's a sunburn? I thought she was a chameleon baby who was just changing colors." <--What I should have said to every jerk that had to point it out.)

We went out to get dinner on the water there, and since it was a pretty touristy part of town there were all these people doing weird grifter stuff. You know, being a robot or a statue or stacking rocks or whatever. Erin found these people to be especially hilarious. I found them to be especially creepy. Especially the guy dressed as Spongebob. Sorry, dude, I'm not letting my kid hug you. I don't know what kind of weirdo you are in that costume. But we had a nice dinner and then went back to the hotel and passed out. I was seriously exhausted after the 3am wake up and being out in the sun.