Picking up Aunt Erin at the Airport 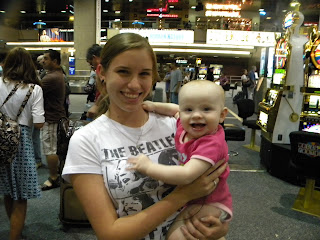 Yay, my littlest sister is here! I left work a few minutes early last night so I could pack up Ramona and we could go to Vegas to pick up Erin from the airport. She was fine until we got to Pahrump. Then she just freaked out and cried almost the entire way to Vegas (which is a very long hour from there when someone is crying.) We stopped to get gas outside of Vegas so I could calm her down, and we met a biker guy who was wearing old timey goggles and had a little dog in a baby bjorn type carrier. Ramona was fascinated with him and he told me about how all babies like him for some reason. He also joked about how his little dog is a chick magnet, but since he's a chick repellent it evens out. He was definitely one of the more colorful characters I've met in awhile. I really wish I had a picture because my description does not do him justice.

Anyway, we got to the airport and parked, and of course the one time I actually had change for the meters there I found out they had gotten rid of the meters and to make you get a ticket and go through the line for short term parking. Annoying! Ramona was hot and unhappy with being cooped up in the car for two hours during playtime, so she was being kind of cranky even though we were finally out of the car. Erin's flight was delayed by a half hour that turned into an hour and fifteen minutes. Ramona was fussy and I figured she was hungry so I decided to nurse her. I very rarely nurse in public because I don't like to make people uncomfortable, but Ramona was starving and I had to be at the airport and it was way too hot to go back and feed her in the car. So we went and found a quiet corner. I don't think anyone really noticed, but it wasn't from lack of trying on Ramona's part. She has started going "Mmmmmmm!" really loudly whenever she nurses, which I guess is flattering (I make some awesome milk apparently), but it's mostly embarrassing. Also, I used to be able to cover up pretty well and just pop my nipple out under my shirt so there wasn't really anything to see, but now Ramona thinks my entire boob should be exposed when she eats. I kept pulling my shirt down and she kept pushing it back up. I guess it adds to the ambiance. Ramona knows what she likes in a dining experience.

After that we went and waited by the gate Erin was supposed to come from, and Ramona was chewing on the cell phone and babbling. Some middle aged guy who was reading kept giving us mean looks, but he was lucky she wasn't crying, and if he knows how to make a baby be quiet he really should reveal his secret. He could make some serious money.

She started getting fussy so we went for a walk so we wouldn't ruin middle aged guy's reading, and when we came back, Erin's flight was no longer on the board, so I figured it must have come in. We went down to the baggage area to wait for Erin and she called a couple minutes later. We found her and I gave her a hug and Ramona was super excited. She tried to stay in the hug when I was pulling away, and after that, she kept throwing her hands out to get Erin to hold her. She was extra enthusiastic because Erin was wearing a necklace, which is pretty much a wearable toy in the mind of a baby. Unfortunately Mommy carried her back to the car since Aunt Erin had to carry her luggage. Then she had to get back in the car which she was not happy about, but she fell asleep pretty quickly so Erin and I could talk without hearing Ramona's tortured soul in the back. (Honestly, sometimes I want one of those sound proof dividers they have in limos for my car.)

Then it took us 90 years to get home because I kept missing my exits on the freeway, but we eventually made it. Now Erin knows what it's like to be in Death Valley in the summer, which is something no one should have to know, but it's only one more day before we're off to the coast.
Posted by Megan at 9:16 PM