A disturbance in the force 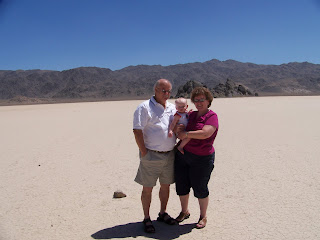 Ramona with her grandparents at the Racetrack
Did you feel it? That disturbance in the force? It was me, not being on the internet for a day. Shocking, I know. But I was busy with Joe's parents for the weekend and yesterday I just didn't feel like being on the computer. I'd had enough at work.

So, what's new? We still haven't located Lars, but she's been spotted several times, so she is surviving, which makes me feel much better. I would like to get her home, but just knowing she's alive is reassuring.

I feel much better about stuff this week. Having Joe's parents out was great. It was nice to spend time with them and Joe and I even got some alone time. We went out to Vegas and had dinner and went shopping. Joe said it was "All about Meggie Day" so he didn't complain about shopping with me even though I made him go to three different malls (although the fact that you can drink booze while you shop in Vegas does take at least a little bit of the sting out of it for him.) Also, I took him to the Rio's Seafood Buffet for dinner which is pretty much his favorite thing in Vegas.

It was nice to buy stuff for myself, though. I really haven't bought myself clothes or anything in a couple years (other than maternity clothes, and I only got a few of those to wear to work.) So it felt good to buy something for me for once. I did buy some stuff for Ramona as well, but not as much as I usually do. I'm trying to build up my work wardrobe so that I have more professional clothing in case I get a job at a less casual office in the future. I got a new suit a month or so ago but I still need to get it tailored. I'm thinking about going to Vegas Labor Day weekend and getting the tailoring done and my hair cut. I think that will definitely get me set and feel like I'm really taking care of myself.

Of course it was nice to have the alone time with Joe. We had fun together and were wishing that I'd taken Monday off work so we could spend the night out there, but unfortunately that wasn't the case. But, to be honest, I was surprised at how weird it was to be without Ramona for those few hours. I kept having that "I'm forgetting something" feeling. And my arms felt weird, because they weren't sore from carrying her around like they usually are. We also saw a bunch of babies which made me miss her even more. As nice as it was to get the break, I was thrilled when we got home and I got to kiss her good night.

Oh, another cool thing we did when Joe's parents were out was go to the Pahrump Winery. It was surprisingly really nice. I always think of Pahrump as being the white trashiest crap town around, so whenever there is something nice there I'm always surprised. I'm not a big wine drinker but it was fun to go and the restaurant was pretty and the food was good. The wine was good (by my nonexistent standards) and there was a sign advertising a grape stomping festival in October that I think we'll check out.

Sorry this was such a stream of consciousness word vomit mess, but I'm too tired to edit it. I promise to post something more cohesive in the near future.
Posted by Megan at 11:33 PM