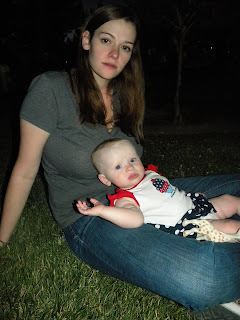 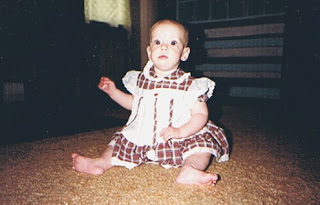 That first picture up there was the first picture I looked at where I thought Ramona sort of looks like me. It's not an awesome picture (Joe described it as, "You both look like you hate life.") But I noticed that it looks like my ear was photoshopped down onto her head. Poor kid has my big old ears! The second picture is me as a baby (evidenced by the giant ears). We don't look much alike as babies. Obviously she looks a lot like Joe (I wish I had a baby picture of him on this computer because they look pretty similar as babies.) But I do think that she has been looking a little more like me as she gets older. And she's a pretty tall baby so maybe that's what she'll get from me- big ears and long legs.

However, people always comment on how much she looks like Joe. "She looks just like you!" Every time we're together in public. Joe says he always feels weird when people say it because he doesn't know what he's supposed to say. "Thanks." I mean it's not really a compliment. "Yeah, I know." "That's what I'm told." I think he should just say, "Well, Maury said I AM the father." But that's just me.

In Lars news, I sent an email to everyone on the mailing list at work with pictures/info about Lars and asked people to let me know if they saw her. One woman said she did, but after she looked at the picture she said it wasn't her. I was disappointed because even if she's not home I at least know she's ok if someone has seen her. Now I'm just worried. Hopefully she has found some water and kept in the shade during the day. We put out food and water for her and there is a little stream that runs behind our house. But no sightings yet. A lot of people had tips and ideas of where she would go. Joe is going to look for her when he gets off work tonight since he thinks she will probably come out of hiding at night. He also bought a cat trap that is supposed to arrive tomorrow so hopefully that works. I haven't given up hope but it's been a rough couple of days worrying.
Posted by Megan at 10:24 PM