Yeah, I didn't post for a week again. Laziness- I embody it. I finally got the ol' W2s and filed my taxes. Work was canceled on Wednesday due to the snowstorm, so I got to stay home and hang out with Joe and Ramona. My doctor's appointment was also canceled since it was on Wednesday, but I got rescheduled for today and it went really well. I had a nurse practitioner and she was awesome. So far, I can highly recommend UTMC's nurse practitioner staff. I also asked about the OB side of their practice and found out that they have a midwife team that's backed by an OB for complicated pregnancies or c-sections, and they deliver at Toledo Hospital. So, if we decide to have another one at some point I know what to expect.

There was nothing too exciting this week. Saturday was a super snow day, so we took Mony out to play in the snow while I shoveled. She enjoyed eating the snow, but not falling down in it. The snow up here is working on getting as high as she is tall, so she was just playing in an area I had shoveled. But it was slippery and she was in a snowsuit, so she was having a hard time walking. We were supposed to go out that night, but the snow kind of killed that plan and we stayed in and watched movies. 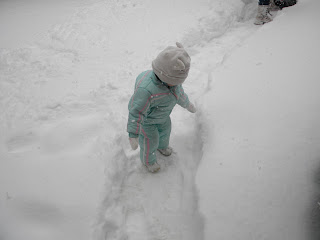 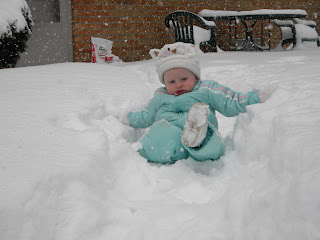 My mom came over Sunday and brought the gown- it fit! So it looks like Ramona will be baptized in the same gown I was baptized in. (You have to admit that's pretty cool.) We should really get some pictures of my baptism so we can compare pictures (hint hint, Mom.) After that we watched the Super Bowl at Joe's parents' house. Ramona wore her Browns outfit since it's the only NFL thing she has. (And really, isn't saying "Yay, Browns!" pretty much the same thing as saying "Boo, Steelers!"?) Obviously, that house full of Browns fans was happy the Steelers lost (although Joe was hoping for some magical way for them to both lose.) I was just glad there was nacho dip and beer. I'd post a picture of Ramona running around, but I left the camera there. Oh, well. Maybe next time.
Posted by Megan at 7:10 PM