So we went ahead and let Ramona try some carrots tonight. She was very confused by the whole process. First I had the spoon of carrots in front of her and she was interested. She kept trying to grab the spoon, so that started the mess that ended up all over her. (Of course I didn't put a bib on her or anything, that would have required thinking ahead.) Then she got some carrots in her mouth and gave us her crazy eyes and spit most of it out. She spent the rest of the time trying to avoid me putting more carrots in her mouth while simultaneously grabbing for the spoon. She made it through four bites (although in the video I say it's three bites, so my stupidity is saved for everyone to see) and then we gave up for now. We'll try again tomorrow, and if she's not excited about the prospect, we might put it off for a couple more weeks when she's a little older. 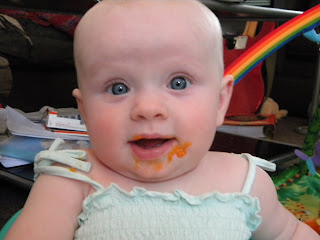 One thing I really love about Ramona's pediatrician is that he realizes that every baby is different and really encourages us to do things when Ramona seems ready instead of following arbitrary guidelines. He's also really nice. The only thing that really bothers me about him is that he speaks quietly. This wouldn't be so terrible except that Ramona has screamed through every single doctor's appointment she's had, so I can never understand what he says and the appointment takes twice as long because I have to keep ask him to repeat himself. Even when she's not screaming I have a hard time hearing him (probably because I'm going deaf from Ramona screaming in ear.) I can sometimes hear about half of what he says and piece together what he was talking about, but it takes me a few seconds to figure it out. So every time he talks to me, I stand there with a quizzical look and then nod, so I'm pretty sure he thinks I'm really stupid and just pretend to know what's going on.

Anyway, next week is Ramona's six month appointment, and I know he's going to ask whether or not she's eating baby food yet, so now we can say we gave it a shot, but are still not positive she's ready. I'm sure he'll be satisfied and probably have some tips. I'm also really excited to show him her tooth. And speaking of teeth, I'm going to the dentist after Ramona's doctor's appointment. Sadly, I'm really excited about it. I'm such a loser that I love going to the dentist because the feeling of sparkling clean teeth is one my little joys in life. Dork! But also I definitely have a cavity and it's starting to make everything I eat taste like death. Today was my cheat meal for the abs diet so I ate one of my precious Easter Peeps and it tasted horrible due to said cavity. That won't do at all. If I only get one Peep a week, it better taste like 100% pure delicious uncut sugar.
Posted by Megan at 11:54 PM