Part Trois- Zooin it up 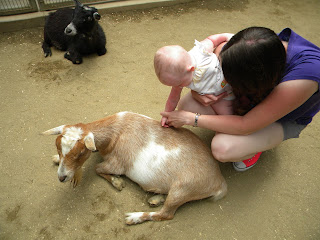 After we were showered and coffeed the next morning we ran off to the zoo. It was pretty awesome. I must say it was really hilly and I got a good workout pushing Ramona's stroller up and down the hills. Joe and I switched off pushing the stroller and holding Ramona since she had no interest in being in her stroller except during nap time. In my opinion, the coolest sights were the giraffes, the reptile house, the koalas and the giant pandas. I love me some pandas, and they had a baby one that was only 11 months old that was up in a tree, which I had never seen before. (A panda in a tree I mean, I obviously had never seen that particular panda before.) There was also a peacock in a tree that I found to be kind of odd looking. They had quite a few baby animals and a bunch of them were born in October, so we got to do a lot of "if Ramona were a giraffe/sea turtle/wild pig, she would be that big!" which was fun.

The petting zoo was also interesting. Ramona was not especially interested in petting the animals, but I was determined she should pet something. We settled on a fat goat that didn't look too intimidating. Ramona pet him nicely for a couple seconds before yanking his hair in the same manner as she does to our cats. The goat didn't seem to notice, and it occurred to me that this was probably not the first time it had happened to him. Poor guy.

That evening we ate at a restaurant (Harbor something?) near the water again and Ramona made friends with the people sitting next to us since she's such a little ham. The food was good (Joe and Erin both exclaimed over the mashed potatoes- Joe said they were the best he's ever had in his life) and we walked around a bit. Ramona played at the hotel for awhile while Erin did some exploring and we talked about renting a movie, but ended up just falling asleep because we're that cool.

The next day we did some shopping (I got some cheap-o costume jewelry in case you were dying to know) and eventually ended up at Stone Brewing. The directions from google maps were kind of confusing and we got a little lost but finally made it there. I wasn't sure if we were in the right place at first, but then I saw the short term parking for growler refills and figured we must have arrived. When we got there the first thing I noticed were all the high quality video cameras and figured they must be recording a tv segment or something. When we were seated for dinner we walked past where they were taping and I'm pretty sure it was the dude from 3 Sheets, so that was pretty cool. It was weird how compelled I felt to say hi (don't worry, I didn't, I'm not that embarrassing yet) to a complete stranger because I'd seen him on television, but I had to restrain myself from making a dumb comment as we passed by.

We sat outside and the weather was gorgeous and the patio and surrounding garden area were just beautiful. The landscaping was top-notch and the staff was incredibly friendly. Our waitress was from the UP so she and Joe talked about Michigan for a little bit and one of the busboys or something kept coming over and playing with Ramona (who was eating it up, as usual.) A lot of their selection seemed to be IPAs, and I'm not into super hoppy beers (unless I'm in the right mood), so I tried an ale and had a taste of Joe's porter (the ale was good and I thought the porter was excellent) and then Joe had an IPA and I decided to try one of their guest brews, a Peach Sour from New Belgium, and it was AWESOME. I like New Belgium a lot to begin with (I drink Fat Tire pretty often) and they had a cherry brew a couple years ago that I really liked that I haven't been able to get a hold of since then, so I was pretty excited when I saw the peach beer listed. But, obviously, the point of this trip was Stone Brewing and I enjoyed their beers and the food was really good. I had a mushroom pasta with a cream sauce that was absolutely delicious, and I also had their garlic cheddar soup that was tasty as well. Erin wasn't super hungry so she just had their crab cake appetizer and she seemed very impressed with it. Joe got the lamb and deemed it excellent. All around, I highly recommend a visit to anyone who winds up in the area. I will definitely be back next time we're in the SD area.

Then Joe drove us back home and it was like a hundred degrees in the house even though it was midnight when we got back. That was the last straw as far as the heat, so I complained to the housing department the next day and got one of our air conditioners replaced. Since then it has been much more pleasant in the house.

In conclusion, it was awesome to get the hell out of Death Valley for a few days; San Diego was awesome; I miss the real world; My daughter is a really well behaved baby; My sister is growing up to be a pretty awesome chick.
Posted by Megan at 9:56 PM