Ramona's bedtime is disastrous. She used to have a very strict 7pm bedtime. It was entirely self imposed. She was tired at 7, I put her to sleep at 7. Over the last couple months, the bedtime has dragged out later and now is anywhere between 8 and 10. I don't really mind it all that much, since I'm up anyway. But it's the actual getting her to sleep and getting her to stay asleep part that really kills me.

I suppose it's actually my fault for using the stupid baby swing forever. The baby swing was a gift from God. Well, it was a gift from my aunt. But it felt like a gift from God because Ramona would actually sleep in it. You know how newborns are supposed to be so sleepy all the time? Ramona must have skipped that class when she was at Uterus University (probably to kick my ribs) because even as a newborn she didn't sleep all that much. She slept more than she sleeps now, but not much more. But the swing was pretty awesome at getting her to fall asleep. So we let her sleep in it pretty much all the time in the beginning because it was so easy. However, I was determined to get her to sleep in her crib when she was ten weeks old. And she sleeps in there sometimes. But she still sleeps in the swing a lot, too. And now that she's getting close to ten months old. It's getting more and more ridiculous. I mean, her legs are hanging over the edge of the swing pretty far. And even though she's strapped in, it doesn't exactly scream safe with her ever increasing mobility. But strapping her in is pretty much the only way to guarantee she won't do the sleep crawling.

However, I have come to accept that no matter how much easier the swing is, I really need to give it up. Just laying her in her crib never seems to work. She always gets super angry and just stands there and screams. So I usually nurse her to sleep. (Yes, I realize that eventually I will need to find another way to get her to sleep, but I'm not giving up both of my crutches at the same time.) After she's been nursed to sleep I transport her to the crib. She sleeps there for awhile. But she ALWAYS wakes up when I finally go to bed later in the night. I live in company housing, and the company has bestowed us a one bedroom apartment. So we all share a room. I'm pretty sure she would sleep a lot better if that wasn't the case, but there is nothing I can do about it right now. So she wakes up. I nurse her or rock her or just cuddle her back to sleep depending on what's working for the moment. I put her back in her crib. Joe comes home from work, either on break or at the end of the night. Ramona wakes up. I bring her to bed to nurse her back to sleep because I'm half asleep and she won't fall back to sleep easily. She nurses for a few minutes then starts the sleep crawling. THIS is the point where I usually just put her in the swing so we can all get some sleep. Then she would go back to sleep, wake up a few hours later again and then I'd just let her cuddle in bed with me until it was time to get up for work. However, the last two days I have let her stay in bed during the sleep crawling because I'm trying to stop the swing. The way I see it during the sleep crawling stage each night, I can either put her in her crib (which generally results in her not sleeping at all and just screaming because she's awake in her crib, so none of us are sleeping because she's screaming) or let her sleep crawl on and off throughout the night in the bed with me (meaning I get no sleep because she's kicking me and I'm worried about her falling off the bed, and Joe goes and sleeps on the couch because he doesn't want to deal with it plus Ramona takes up too much of the bed with her moving around.) Both of these alternatives leave me with pretty much no sleep, so this whole no swing initiative has turned me into a super unpleasant person.

I'm really tired. Ramona seems fine. She has been extra happy the last couple of days. I don't know if she is enjoying the sleep crawling so much or what, but she has been in an awesome mood. So I guess it's good for her even if it's terrible for me. I just need to keep working on getting her in that crib all night. And so I started my "Crib time is Fun time!" initiative. I put Ramona in her crib and played with her for like an hour the other night. I figured if she has positive associations with the crib, she won't be so angry whenever I put her in there, and she might even just fall back asleep when she wakes up instead of screaming at me. So we played with her soother. And played with Monkey Buddy and Weirdo Puppy. (Weirdo Puppy plays You are my Shining Star by the Manhattans which seems weird for a children's toy to me in case you're curious about the name.) Then we played the ever popular Peek a Boo: under the blanky edition. Then I fake sneezed for her a bunch, which she thinks is the most hilarious thing ever right now. And she smiled and loved being in her crib. And now I'm getting ready to go in the bedroom and bracing myself for another long night. I am hoping the Crib time is Fun time initiative pays off. Wish me luck tonight. I need it. 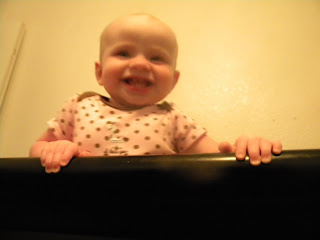