The difference between boys and girls

I buy Ramona stuff from the boys' section of the store, especially pajamas. Like, why can't a girl wear something with dinosaurs or frogs or monkeys on it, right? So last night Joe was kind enough to give Ramona her bath and get her dressed for bed which was a big deal because he NEVER does that. Like I think he's given her a bath maybe five times in her life. I always do it. Anyway, he put her in her frog jammies and said, "Am I crazy or are the snaps on these all backwards? Like they're the opposite of all the other clothes." And I said, "Yeah, those are boy pajamas." He gave me a blank stare. "Boy clothes all zip, button, and snap the opposite of girls." Blank stare. "For adults, too." He had no idea. Sometimes it amazes me the things he doesn't know.

We had a pretty great weekend though. It was a completely lazy do nothing weekend. Saturday morning Ramona tried to give me a heart attack by face planting off the bed directly onto the floor. She has an injury on her nose but was otherwise fine even though I was sure she had broke her neck. I was in the bathroom and left her on the bed with Joe and I looked over and saw her land face first on the ground. It was pretty scary. (And in Joe's defense, he was sleeping, but when he puts Ramona on me when I'm sleeping I still make sure she doesn't fall off the bed!) 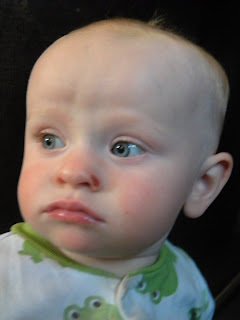 Nose boo boo and the mysteriously snapped frog pajamas
After we deduced she was fine and she calmed down I took her to the pool and we splashed around and had fun. The rest of Saturday was hanging out, taking naps, and eating pizza rolls. Ramona also ate bacon for the first time, so Joe was excited about that. Sunday was more of the same, only with more job applying on my end. We had fun but did nothing. Sometimes it's just nice to enjoy each others' company.

Ramona has been in a much better mood lately. Her eighth tooth finally broke through a little over a week ago, so she's on a teething break which has let her sleep a lot better and just be in a better mood over all. She's also settled on an 8:30 bed time, which I like because it gives us some consistency. She's been very independent lately except before bed and nap time, which is when she wants to cuddle the most. And she's been eating really well. Tonight I gave her cheese, crackers, and broccoli for dinner and she ate all of it. I've been trying to give her more balanced meals instead of just a bunch of one food, which is what I was doing before. As of now she eats pretty much everything and isn't picky at all. I'm hoping she keeps that up as she gets older.

She likes to stand, either on her own in the middle of the room or holding on to something, and she'll walk around holding onto the furniture, but she won't walk holding onto our hands. I'm thinking she might skip that altogether because she doesn't seem interested in it at all. But she has been thinking about trying some steps. She attempted one step yesterday for the first time and fell right over, but I can see the wheels turning in her mind when she's standing there and wants to go somewhere else. She considers walking but then banishes the thought and crumples onto the ground and crawls instead. I'm fine with that. It's exciting to think of her walking, but I'm enjoying the crawling stage. It seems less dangerous.
Posted by Megan at 8:53 PM