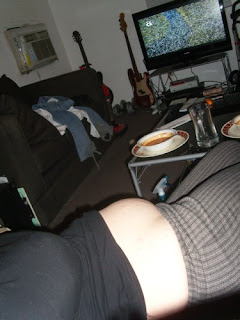 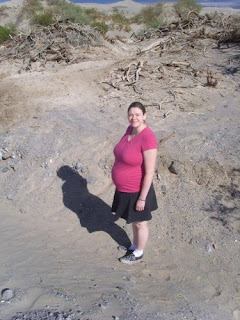 One of the weirder aspects of my pregnancy with Ramona was how slowly I acquired the signature "Baby Bump" look. I wasn't really looking pregnant (and not just fat) until September (keep in mind that Ramona was due October 9) and I went from not showing to REALLY showing incredibly quickly. It was noticeable to me. Like, one week I could see the numbers on the copying machine at work fine and literally a week later they were obscured by baby belly. The initial tiny belly wasn't just a concern to me. The doctor was concerned enough about it that I had to do a lot of ultrasound visits just to verify that Ramona was growing properly. (She was.) And since I never really "announced" my pregnancy other than telling my boss and HR about my LOA, a lot of people didn't even know about it. One of my employees found out when I was five months and she was shocked. "You're pregnant? I look more pregnant than you!" When I was around the point the first picture up there was taken I thought I was looking pretty pregnant (compared to before) so I figured people knew. So when I was telling one of my employees that I was printing him off some reports so he wouldn't have to ask my boss to do it while I was gone, and he was confused, I was surprised. He thought I was moving away or something. I clarified that I was going to be on maternity leave in a few weeks, and he was like, "Oh. I didn't know you were pregnant." Even when people had heard I was pregnant, they always thought I was like three months pregnant instead of rapidly approaching D-Day. I was actually pretty bummed about it. I kind of wanted people to ask if I knew whether it was a girl or boy, and tell me their horror stories and maybe even request a belly rub. No one Joe or I hadn't told made a comment about it until I was 36 weeks. And then the guy at Sonic accidentally made me a large milkshake instead of a small and asked if it was ok. Obviously I was fine with that. Then he made some remark about how the extra milkshake is for the baby. And I was so happy. It was noticeable! And people thought I was pregnant and not just fat! It was pretty awesome.

I wonder if the same thing will happen with future pregnancies or if the previously stretched uterus/abs will give in easier next time. Does my giant torso just have plenty of room or were there other factors at play? Am I destined for an I Didn't Know I Was Pregnant pregnancy in the future? I guess we'll see at some point. In the meantime, I encourage all you who haven't had kids to enjoy your body as is. Thinking back on how self conscious I was before all these stretchmarks, I can't believe how little faith I had in my own hotness. Hindsight is 20/20 blah blah blah, so take a tip from me and flaunt it while ya got it. (For the record I've still got it. Just a flabbier stretchier it.)
Posted by Megan at 2:55 PM