Ramona is loving spring- especially the little burst of nice weather we had last week. She played outside for the first time in a long time and had a great time running around and investigating all the pine cones and sticks in the backyard. 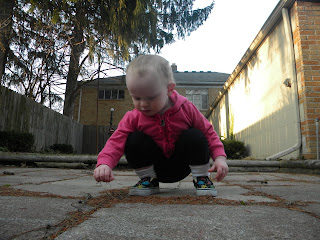 We've been seeing my family a lot lately which has been nice. We went to hang out for my mom's birthday, then the next weekend Erin had the high school musical which she was managing the backstage for, and then this past weekend was some play Kathleen was involved with due to her affiliation with Mitch. Both the plays were enjoyable and I had a lot fun getting to see everyone. Ramona seems to be having fun playing with Mom.

Today we went over to see Joe's parents since we hadn't been over there in awhile. It's weird to deal with how often we should visit our families. Now that we've moved home and especially since we have a kid, it's a balance of trying to not be a burden or a bother and show up too often, and making sure we visit regularly so we can see everyone. I think we're doing ok, but who knows? It's hard to know what people are thinking.

Ramona has added some to her vocabulary- now she says mommy, daddy, up, ball, wow, hi, and bye. She says other things by just repeating things I say, but those are the ones she actually uses independently of my prompting. She also enjoys saying "Arf! Arf!" when I talk about what noise dogs make, and thinks high fives are totally awesome. Her favorite song right now (other than ANYTHING on Yo Gabba Gabba!) is Old MacDonald, which I change to Old MacMony, and she loves to sing the EIEIO part. She has been extra lovable this week due to her enthusiasm for the new things we've been doing. 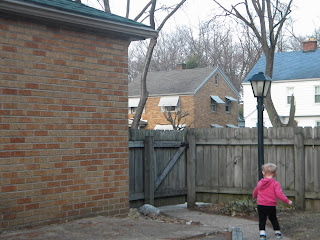 Wedding update- we went to look at Ward Pavilion today and I liked it a lot more than I thought I would. I was worried about the wood paneling and drop ceilings, but it's actually really cute! The wood paneling is more lodge than 80s basement rec room, and the drop ceiling panels are faux wood (or real wood, I didn't look that closely) so they looked nicer. My only concern is that it's a little small. But, we're planning on a small reception, so I think we should be fine. We also have the option of tenting the patio area, so that's something to consider. But I think I'll book it when I get paid Friday. I like that it's
1) directly across from the church
2) in a park, since Joe and I have such a history with the parks
3) not "fancy". Pretty much every reception hall in Toledo is fake fancy in a really cheesy way, and our reception is about being fun and silly not fancy. I mean I want to wear a pretty dress, but that's the extent of the fancy. I want to be happy, not classy. I mean, I'm not going out of my way to make it tacky, but I want it to be casual and fun.
4) adjacent to a little playground, since we're inviting quite a few kids.
5) not too expensive, and finally
6) not requiring a specific caterer so I can pick what I want within my budget.

In other news, I asked my sister Kathleen to be my maid of honor and she said yes! We haven't nailed down the rest of the bridal party yet (except my other sister Erin, obviously, who I need to invite over for an official type bridesmaid request since she was out prom shopping on Saturday.) It kind of depends on how many attendants we want to have, which we haven't determined, and getting Joe to discuss wedding details is like pulling teeth. He wants to be involved and get asked about things, but he takes forever to make decisions which would be fine if we had more than six months to get this crap together but we don't. I'm a little more worried about pulling it off than I thought I'd be (both financially and pure planning-wise), but I'm sure it will be fine. We meet with Pastor Bob this week to get that whole ball rolling, so we are slowly making progress.
Posted by Megan at 7:21 PM