Ramona talks about the beach a lot (almost as much as she talks about Christmas). She doesn't remember ever going to the beach since she hasn't been since she was 9 months old and we went to San Diego. So, we've been really wanting to take her. We decided to go to Maumee Bay today if the weather was nice, and it was, so we packed up our beach stuff and grabbed lunch at Subway so we could have a picnic on the beach.

She wore her new sunglasses almost the entire way there because she thought that is what you're supposed to do at the beach, I guess. I think she half didn't believe we were actually going to the beach, because when we got to the parking lot, she didn't seem that excited. From her height, I think she could only see the grassy hill and not the beach behind it. I really regret taking her ahead while Joe unpacked the car because her crazy excitement is now one of my favorite memories. There really is nothing as precious as the pure unadulterated joy of a child, and that was exactly what exuded as soon as we walked over the hill and she saw the beach.

"The beach! The beach! Fishie, look! We can play in the sand!" She immediately crouched down and started playing in the sand. I told her to look up and she saw the water. "The water! The beach!" So we walked down to the water and waded up to our ankles, but I told her she had to wait to go any deeper for Daddy to get there because we had to put on swimsuits. (I didn't do the swimsuit thing since I'm 38 weeks pregnant and did not want to subject the world to my pale, bloated body. Although the great thing about swimming in Lake Erie is that no matter how huge you think you are, you will never be the biggest person there.)

Joe got everything down to the beach, got us set up, and we ate lunch. Ramona was very impatient for us to finish eating so she could get in the water. She dug in the sand to pass the time, but really didn't want to wait much longer. 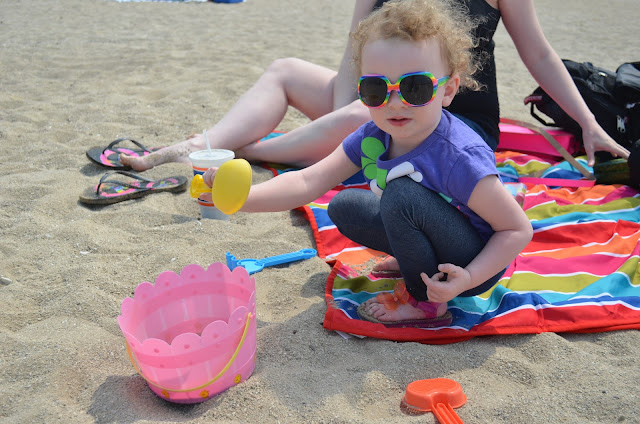 I thought she might be afraid of the waves, but she had a blast. 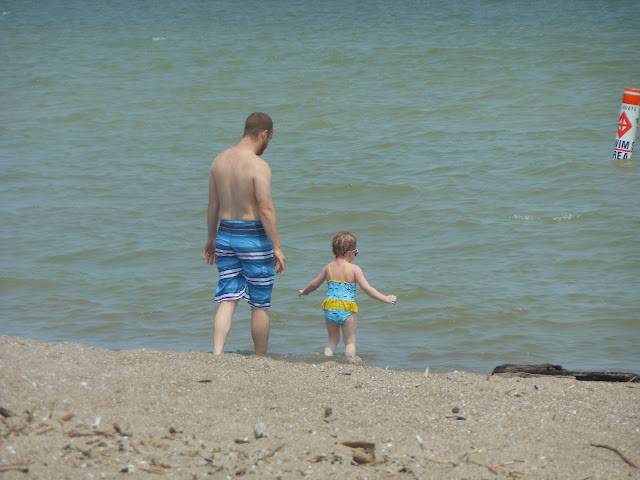 I laid on the blanket and took pictures. I was having a nice time there until some annoying people decided to set up their stuff two feet away from our blanket (literally) even though there was plenty of room on the beach and no reason for them to be so close. So I got to listen to some middle aged mom of teenagers talk about how she is a cool mom because she totally lets her kids smoke pot and get laid. She was telling this to her daughter's friend, which seemed kind of weird. She also told her daughter (who she said was 14) that she would take her to work out all summer so she would be super hot, which also seemed odd. I guess what I'm saying is, thanks for never pimping me out, Mom, especially when I was 14.

But other than that, it was a good time. Ramona was so happy, and it made me so happy to make her so happy. We had a lot of fun. Looking at pictures of me made me kind of sad since I'm so huge now, but I'm super pregnant, so what can I do? I did this weight gain and loss with Ramona, and I'll do it again with this kid.

I'm a little sun burned, but not too bad. Ramona got a bit of sun on her shoulders, too, even though she actually got sunblock. The kid is just SO pale, it's hard for her to get any sun without burning a little. 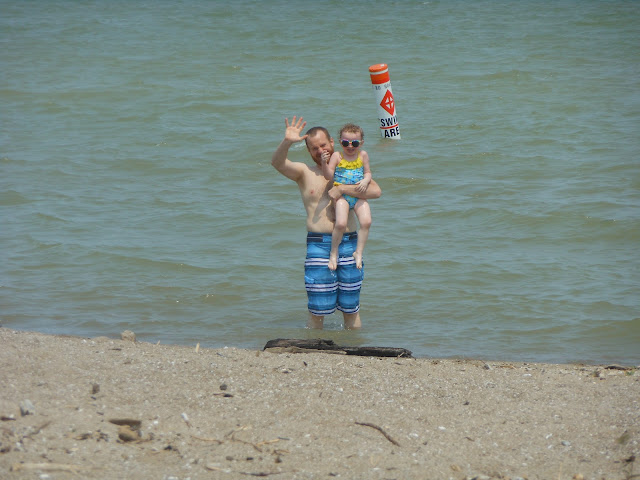 And look at how long her legs are! Kid is KILLING me with how big she's getting. It's hard to believe we'll be starting over with one of those unbelievably tiny kids again in a few weeks.

Anyway, I see many more beach trips coming up this summer and I'm even more convinced we need to spend a weekend up in Traverse City to play on a beach with nice sand and cleaner water. Tomorrow we are heading to Oak Harbor to see my little sister Erin's last marching band performance with her high school in the Memorial Day parade. Then, we're heading to Joe's parents house to eat barbeque and hang out. It should be fun.
Posted by Megan at 10:28 PM